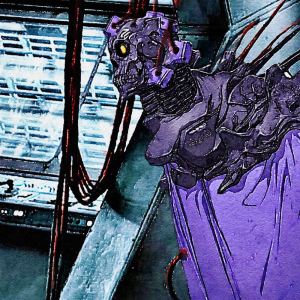 Only two Tof PRYR Protocol Droids are known to have existed in the galaxy, Epsilon and Omicron, who served on the Dugan&rsquor;s Hand and were destroyed in 2 ABY. It is believed that ancient Tof deep space raiding ships possessed two ship&rsquor;s complements: a Tof raiding crew and a Je&rsquor;daii apostolic order of Tof and these unique droids.

Little is known of Tof Je&rsquor;daii tradition other than PRYR droids appear in pairs, one of the Ashla (light) and one of the Bogan (dark), and are believed to be Je&rsquor;daii constructs. A PRYR droid is thought to draw its power from the Force in a similar manner as a lightsaber, which explains an embedded force-attuned kaiburr (kyber) crystal deep inside the chest of a PRYR droid. Experience with PRYR Epsilon indicates that the droids are protectors of Je&rsquor;daii artifacts and play a role in the forced conversion/baptism of the unfaithful through inquisitorial practice.