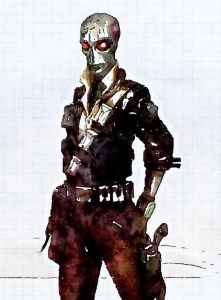 Gok-Tok Muusuubuu was the matriarch of the Muusuubuu clan who founded and led the Muusuubee Salvage Works (MSW). She was reported lost during a salvaging accident that occurred on 2 ABY 29 Golf.

The family-run Durese company holds a valid Imperial salvage contract, which until 2 ABY was solely managed by Gok-Tok. Gok-Tok maintained a plethora of business connections in the Outer Rim, Mid Rim, and Core worlds and avoided political entanglements as best she could. With the impact of the Galactic Civil War growing, Gok-Tok was seeking to diversify its operations. Unfortunately, Gok-Tok was lost during a large extraction operation in the mud fields of Mimban. A repurposed demilitarized AT-ATs slid off of a stone outcropping and collapsed into the mud field below, trapping Gok Tok and several family members with no means to escape.

After her disappearance, MSW ceased operations as a salvaging contractor and now operates as prime licensor, granting salvage contracts to sublicensees who recover salvageable materials in post-military action combat zones on MSW&rsquor;s behalf.