Similar to the Tof Ashla Knight Shoto Lightsaber, the Tof Ashla Pontifex Shoto Lightsaber is similar to a shoto or tonfa-style lightsaber with its grip set perpendicular to the blade to allow the wielder to rapidly transition from attack to defense. The Ashla Pontifex Shoto Lightsaber is a dual action weapon with a heavy blaster set in its pommel at the opposite end of the blade. The pommel can only be used with this type of lightsaber and will be rendered useless if removed or integrated with another lightsaber. The lightsaber uses a Sorian Crystal, which generates a green glow in its blade that flashes yellow when the blade strikes an object. 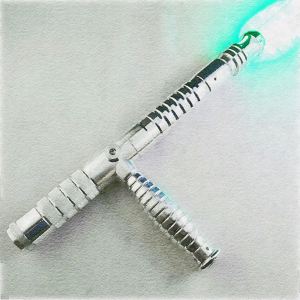